No, Jesus Was Not An American 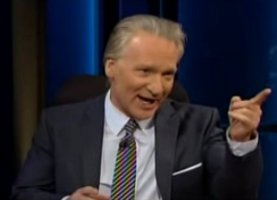 Yes, the title of this post is a little bizarre.  When you take up the bizarre task of responding to Bill Maher (half comedian, half political commentator, all theophobe), you often end up in this wacky territory.  You see, Bill Maher is not someone to take seriously, and taking him seriously often brings with it the nagging feeling that you’re being duped, sort of like being really hospitable to Borat.  But you also can’t ignore this guy either, because, believe it or not, he has an audience, an influence, and a misbegotten idea that when it comes to Mormons, he knows what he’s talking about.

Well, he doesn’t.  Let’s repeat that: Bill Maher doesn’t know anything about Mormons.  For example, he says that all of Mitt Romney’s significant charitable donations to the LDS Church (we’re sugarcoating: the word used was “cult”) are meaningless, since the LDS Church doesn’t help anyone poor with its money.  Yet sophisticated research (i.e., the top link on a basic Google search) reveals that the LDS Church operates 141 welfare food storehouses and 322 employment resource centers and supports 8,167 welfare missionaries (i.e., volunteers working in purely charitable endeavors), and since 1985 has assisted in 198 global disaster relief efforts, donated cash and material supplies valued over a billion dollars, and distributed 10.3 million hygiene, newborn, and school kits.  So either Bill Maher doesn’t know what he’s talking about, or he just counts newborn babies in developing countries as undeserving of serious aid, along with Cornell.

But that’s all just preface.  In the Overtime portion of his show this weekend, Maher had some new comments about Mormons, including the notion that Mormons teach that Jesus is American.

Again with the American exceptionalism.  Let’s try and summarize what is true and false about this notion.  It is true that the LDS Church was established on American soil, that Mormon scripture ascribes a blessedness to this land, and that Mormons generally believe the nation’s founding was guided by providence to establish a place of religious freedom where God could restore his church. In fact, Mormons believe that the Book of Mormon, a foundational Mormon scripture, relates events that took place somewhere on North or South America.  The Book of Mormon tells one story in which the resurrected Christ appeared to an ancient nation of people living in this hemisphere, and instructed and healed them over the course of a few days.    Taken together, these ideas have percolated within Mormon culture to create a deeply-felt patriotism that is probably above average among religious communities.  Mormons believe that America is great, was born out of inspiration, and has played host to some important events.

Do Mormons teach that Jesus was American? No.  The Book of Mormon story is quite consistent with the biography of the Christ as set forth in the New Testament.  Jesus was born in Bethlehem, grew up in Nazareth, and ministered throughout Palestine before his death.  His short visit to the people of the Book of Mormon, after his resurrection, doesn’t make Jesus an American any more than a visit to the library would make Bill Maher open-minded. You will never find a Mormon claiming that Jesus was an American, nor have I ever heard such an idea taught in an LDS setting.  I also don’t see any connection between believing that America has played a great role in sacred events and believing that America should dominate all the other nations of the world, but that will have to wait for another post.

Lastly, Bill Maher says that Jesus was at least “sincere,” in contrast to Joseph Smith, who was an obvious “con man.”  The con man line is difficult to discuss without delving into significant historical detail (though it is indeed false).  However, here’s one good shorthand test for figuring out whether a self-described prophet is really just a con man: set out to kill him.  Typically, a con man will abandon his message rather than die for it.  Joseph Smith never did that– he was killed for his message, and stood by it until the very end.  He was imprisoned by his enemies numerous times, and was persecuted all of his life, without ever a hint that he might be ready to back off his story.  It’s not a great life for a scam artist.  Whether one believes Joseph Smith’s message or not, a knowledge of his life and times is at least sufficient to reveal that the man’s efforts were sincere.

The jury’s still out on Bill Maher though.

A smarter discussion, including ideas of Mormons’ attachment to America, took place over the weekend on Melissa Harris-Perry’s MSNBC show, which you can watch here.